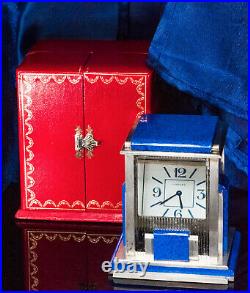 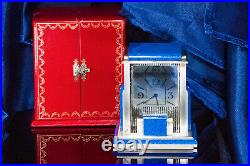 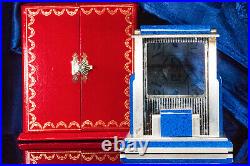 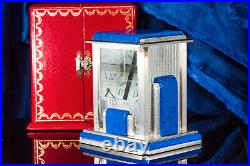 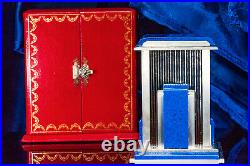 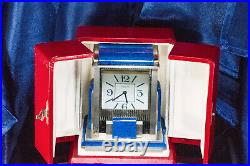 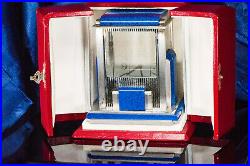 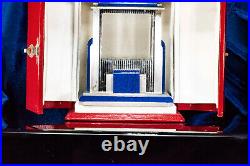 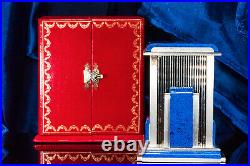 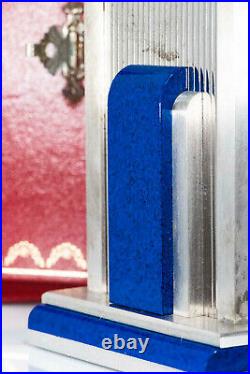 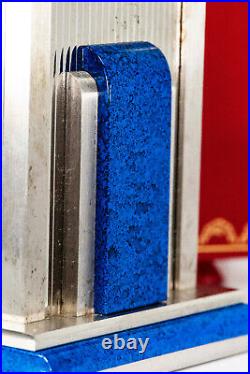 Case Dimensions 10cm Height x 9cm x 8cm Base Foot Print Fully Signed Cartier Paris & Serial Numbered Recently Serviced & Perfect Working Condition Accompanied with original Cartier Box For additional background details on the concept of this particular Cartier clock case design of the prism clock and why it is classified as a mystery clock as well, read below to learn more about its unique unique elements of illusion which it possesses and how it works. History & Significance of The Cartier Mystery Clock & the Prism Clock Like many of Cartiers inspirations for clocks, the present clock also drew from the elements of magic and illusion. In 1898, Louis Cartier, one of the three Cartier brothers and grandson of founder Louis-François, moved to 13 rue de La Paix with his father, Alfred. Louis was a talented creator of jewels and art objects, and expanded his skills by tying his craft with clock making traditions, lost now for more than a century. During this time frame, societys interests were gravitating heavily towards a new found fascination illusion, magic and the slight of hand and as more people became interested in the artistry of Houdini and other similarly accredited magicians, the Cartier brothers looked to incorporate this fascination into the foothold of many of their table clocks which used various elements of illusion to hide the working mechanism or even the dial as a whole giving way to the invention famously known as the mystery clock.

As a result the Pendules Mystérieuses, or mystery clocks and other fascinating illusions , were Cartiers masterpieces, and continued to epitomize the companys exceptional artistry for decades to come in their objects of virtu and desk clocks so successfully that this incorporation made the firms clocks more desirable then any other in the world. Historically, it is a well known fact that Cartier guarded the secret behind these masterpieces fiercely even at the expense of their own sales staff which they would change around so nobody would learn of the way the invention was being created. It was not simply a matter of the name; the Mysteryclock always contained a secret that was supposed to be never revealed, explains Hans Nadelhoffer in his book, Cartier: Jewellers Extraordinary. Over-inquisitive salesmen at the Rue de la Paix, who tried to force explanations from the craftsmen, were rebuffed and fired even.

For decades examples of The wonder clocks such as this example have had their secret guarded like the Sphinx, and Cartier protected them from the eyes of prying admirers and competitors alike. Even To this day Cartier is still the only creator of this clock design. Generally speaking if not familiar, Mystery clocks are considered by many to be one of the House of Cartiers greatest achievements. Queen Mary was given a Mystery clock in 1924; in 1945, General Charles de Gaulle presented one of these ingenious creations to Joseph Stalin.

The present clock as with the other mystery clocks consistently demonstrates this level of exceptional engineering and stylish artistry, and is hence why it is part of this mystery clock genre which Cartier is so famously known for. The Prisms Illusion & How it works : Like Mystery clock genre, the Prism clocks rely on a simple but clever sleight of hand to amuse the viewer.

Inspired by the workings of a submarine periscope, Gaston Cusin invented this ingenious effect using a set of quartz mirrors to form a prism which sits inside the clock, above the clock face and mechanism which are concealed in the base. This then made it possible for the clock face to be only visible from the front of the clock, appearing at a slightly reclined angle. The dial is in the classic Cartier style when in sight But turn the clock around, and everything disappears. For example, from the rear the clock is entirely transparent and see through as well making it an extremely fascinating example.

See photos for reference making it one of the firms most sight after clock design types. Additionally the condition is excellent and the present clock which is crafted in a sleek Art Deco style with hand cut lapis lazuli accents is in perfect condition as well with no chips or discoloration to the silver case and no interior damaged to set of quartz crystal prisms and mirrors along the interior walls. The Movement The mechanical 8 day movement is also in perfect condition and signed Cartier Plaqué Argent 20M Swiss. The case is marked Cartier Paris/ Marques et Modèle Déposés/ Registered Trademarks and Design & serial numbered and the movement is made in-house by Cartier at its La Chaux-de-Fonds manufacture, making Cartier one of the few watch companies still manufacturing mechanical clocks movements. Additionally the clock is accompanied by its original red embossed leather case as well and was produced in extremely limited production. Additional References: Le Temps de Cartier, 1989, Jader Barracca, Giampiero Negretti, and Franco Nencini. For additional photos or video please do not hesitate to ask.. The item "Rare Vintage Cartier Mystery Prism Lapis Clock with Coin Edge Case & Original Box" is in sale since Sunday, September 15, 2019. This item is in the category "Collectibles\Clocks\Modern (1970-Now)\Shelf, Mantel". The seller is "exoticwatchcollectors2" and is located in Pacific Palisades, California. This item can be shipped worldwide.